Hi guys! I’m I. W. Gregorio, and I feel so lucky to be interviewing the fabulous Corinne Duyvis, co-founder of the terrific Disability in Kidlit blog and author of OTHERBOUND, a complex work of speculative fiction that’s already garnered four starred reviews and been named a Junior Library Guild selection.

Nolan doesn’t see darkness when he closes his eyes. Instead, he’s transported into the mind of Amara, a girl living in a different world. Nolan’s life in his small Arizona town is full of history tests, family tension, and laundry; his parents think he has epilepsy, judging from his frequent blackouts. Amara’s world is full of magic and danger–she’s a mute servant girl who’s tasked with protecting a renegade princess. Nolan is only an observer in Amara’s world–until he learns to control her. At first, Amara is terrified. Then, she’s furious. But to keep the princess–and themselves–alive, they’ll have to work together and discover the truth behind their connection.

A fascinating premise, clearly and compellingly written and imagined by a startlingly original debut writer.

1. Corinne, we are so happy to have you here on the Fifteeners blog. Congrats on your debut, which has been getting an incredible amount of praise. Tell us a little about what inspired your book.

Oh man, so many different things that it’s hard to identify them all. However, I think the driving force behind it was the desire to do something different. I knew from the start this would be a tricky and ambitious kind of book, and that was actually one of the things that spurred me on.

I had just received a lot of rejections on my previous book, in large part because of the full YA fantasy market. I ended up seeing Otherbound as sort of a challenge: to me, to see how far I could push myself, and to the industry, to see whether this was enough to hook their interest. (Spoiler alert: apparently so.)

2. How long have you been writing, and do you have any tips for aspiring novelists?

Depends on how you look at it—I enjoyed writing stories as a kid, then started writing on a regular basis when I was around thirteen or fourteen in the context of online roleplaying games. (X-Men was my poison of choice.)  I started writing original novels when I was eighteen, which was about six-seven years ago; Otherbound was the sixth novel I wrote.

As for tips: push yourself. Be different. Write weird. Take risks. Even if it doesn’t pay off, you’ll learn countless things in the process.

3. At some point you Tweeted (I think) about how you were pleasantly surprised to find an editor who didn’t have qualms about publishing a book with two disabled, POC main characters, featuring nonheteronormative relationships. Is there any advice you’d like to share with querying writers re: the submissions process for diverse books?

That surprise came more from hearing about other people’s experiences than from my own, thankfully. While it’s possible that my characters played a part in some agents’ rejections, no one ever told me as much, so I never felt like I received any pushback because of the diversity in the book.

In terms of advice … don’t compromise. Avoid making your characters whiter or straighter or abler than they are in your head because you’re worried the book won’t sell. Keep them as they are, make sure you’ve done your research, and go for it. It may be harder, but there many people in the industry who sincerely want to support these books. It’s so important that we give them—and ourselves—the chance. We shouldn’t reject ourselves on other people’s behalf.

4. I see you’re a graduate of the Clarion workshop, which I’ve heard is amazing. What was the one most valuable thing you learned there?

This sounds obvious, but: subjectivity. There’s nothing like spending a morning listening to eighteen opinions about a short story you wrote to understand that how people perceive your story depends so much on them, their preferences, and their mood. One person’s favorite part might make another person stop reading.

It allows for an odd sense of freedom, to realize that you’ll never be able to please everyone.

5. You’ve created a stunning, nuanced fantasy world in the The Dunelands. What was the part of world-building that you most enjoyed?

I truly loved creating the different countries and ethnic groups in the book and figuring out the world’s political history.  It feels so exciting when you see the world coming together in a way that feels real and believable.

Also, I really liked sneaking in various Dutch elements. I wonder how many people in and outside of the country will pick up on!

6. How has the debut process been for you so far? Anything you didn’t expect?

Honestly, I’ve been having an unbelievably fantastic debut experience! My publisher is wonderful, the reviews are mind-blowing, my fellow authors are marvelous, industry feedback is supportive, my Twitter friends are super enthusiastic … So, honestly, that may be what I didn’t expect: I was bracing myself for stress and nervousness and worry, but it went much better than I could ever have dreamed.

I’m afraid of spiders. It’s cliché, but true. I just freeze up. And then I freak out if they actually start moving. I just—nope. Nope. Can’t do it. Spiders are not for me.

On the flip side, I’m not afraid of … a lot of things I probably should be afraid of. It may be a result of living in the Netherlands, where we don’t really have to worry about dangerous animals or natural disasters much, but I have zero sense of self-preservation. Whenever I’m in the US and exploring nature, I’m always furiously hoping to see a snake or bear or coyote or cougar. In fact, snakes and bears still rank high in my favorite animals list. When I finally saw my first wild snake in Virginia two years ago, it was sunbathing on a rock in the middle of a river. I was so excited that I climbed across, going from stone to stone, so I could see the snake up-close and get our picture taken together. The friend I was with nearly had a heart attack.

Not my brightest moment, in retrospect.

I had a lot of fun answering these. Thanks so much, Ilene! 😀 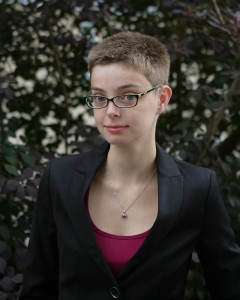 A lifelong Amsterdammer, Corinne Duyvis spends her days writing speculative young adult and middle grade novels. She enjoys brutal martial arts and gets her geek on whenever possible. Otherbound, her YA fantasy debut, is now out from Amulet Books/ABRAMS. It has received starred reviews from Kirkus, Publishers Weekly, School Library Journal, and BCCB. Kirkus called it “original and compelling; a stunning debut,” while BCCB praised its “subtle, nuanced examinations of power dynamics and privilege.” Find Corinne at her Twitter or Tumblr.