I nabbed this interview, not only to feast early on THE FIRE WISH, but Amber and I are also editor siblings! So it is with extra pleasure that I inquire about this intriguing author and enchanting story, which debuted yesterday from Random House Books for Young Readers! 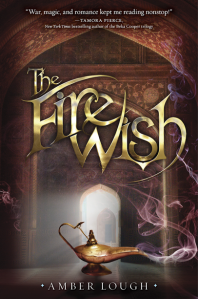 In this romantic and evocative fantasy, Najwa is a jinni, training to be a spy in the war against the humans. Zayele is a human, on her way to marry a prince of Baghdad–which she’ll do anything to avoid.  So she captures Najwa and makes a wish.  With a rush of smoke and fire they fall apart and re-form–as each other.  A jinni and a human, trading lives. Both girls must play their parts among enemies who would kill them if the deception were ever discovered–enemies including the young men Najwa and Zayele are just discovering they might love.

You can find THE FIRE WISH here:

SW:  I’m so curious about the inspiration for THE FIRE WISH.  I know you spent time in Baghdad, where, you say, the ancient sands still echo (how beautiful!)  Tell us more!

AL:  I must admit I did not write that bit about the ancient sands–my editor did–but it’s true that I thought about that all the time. The real inspiration for THE FIRE WISH began years and years ago, when I was first listening to the stories in 1001 Nights.  I was completely captivated by the magic.  Then I spent my middle school years in Bahrain, and it grew on me. Unfortunately the war has prevented me from seeing the best parts of Iraq, but I hope to go there again.

SW:  One of the things that makes THE FIRE WISH so richly vivid is the way you drop tiny details within details. How you describe a rose, a barge, a loom, a scent lures us into this world.  What was research (and how did you research?) and/or what was drawn from fantasy?

AL:  Thank you!  Most of the details just come to me as I write, but there are some things I had to research, such as what the barges would have looked like, the fact that people travelled by canal more often than by camel or horse, and what sorts of flora and fauna (and in the case of the Cavern, crystals) actually exist in that environment.  I wanted the sensory details to be as accurate as possible because it’s the best way for me to get the reader into the setting, and for this story, that’s important.

SW:  How was it tackling two main (female) characters?

AL:  It was not something I planned on doing.  I wrote the first draft entirely from Najwa’s POV and then realized I’d ignored Zayele, and she’s not one to stand by and be forgotten.  I had to go back many times and try to make them sound less like the other girl.  It wasn’t easy.

SW:  And Najwa and Zayele alternate chapters–was that a challenge to write?

SW:  A palace filled with silks and gardens, or the Cavern riddled with gems and crystals–which would you choose?  And while we’re at it: prince or jinn? (I’ll just note here that both are swoon-worthy!)

AL: I can’t choose between the two places!  I’d like to go back and forth as I please, but always with Kamal by my side.  I’m a sucker for smart, inventive people.  What about you?  Which place and boy would you prefer?  Or girl, as the case may be?

SW:  I’ll take Kamal and the palace, with the option to visit the Cavern!  I agree that it’s difficult to choose–persons and places are so richly drawn by your hand.  Which leads me to another question:  Was there a particular moment when you knew you wanted to be a writer?  Which came first:  imagining a story, or the need to write?

AL:  I’ve wanted to be a writer since I was in second grade, but I never seriously pursued it until I was deployed to Iraq.  I came face-to-face with the reality of life and death, and decided I could no longer put it off. If I wanted to write a book before I died, I need to do it now rather than later.

SW:  Any wish you would make, if given the opportunity?

AL:  I’d wish to be able to speak and understand all the world’s languages like a native.  Or at least ten more, starting with German, since I’m moving to Germany this September.

SW:  Ah… safe travels.  But WAIT: I understand there’s a sequel (yay!)  What can you divulge?

AL:  Not much yet, but I can say the title is THE BLIND WISH and it is told from the same two characters, Najwa and Zayele.  It follows the story not long after we left off at the end of THE FIRE WISH.

AL:  This is a fantastic question, and it’s one of the things I’m interested in–I want to know what people are afraid of.  I’m afraid of losing my memories, but I am not afraid of spiders, snakes, or storms.

SW: Thank you Amber!  Best of luck on your move and so many congratulations on this fantastic debut! 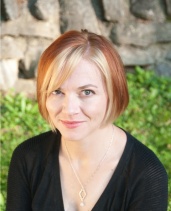 Amber Lough spent much of her childhood in Japan and Bahrain.  Later, she returned to the Middle East as an Air Force intelligence officer, deployed for eight months in Baghdad, where the ancient sands still echo the voices lost to wind and time.  She currently lives in Syracuse, NY with her husband, their two kids, and their cat, Popcorn. For a pronunciation guide, a cast of characters, and more, please visit amberlough.com.  You can also follow Amber on Twitter @amberlough and Tumblr amberlough.tumblr

One thought on “ALL FOUR KIDS: AN INTERVIEW WITH AMBER LOUGH, AUTHOR OF THE FIRE WISH”