The title of this interview is a little misleading, since Kerry’s one of our own, so we’re especially thrilled that her thoughtful MG contemporary, JUST A DROP OF WATER, comes out today!

About JUST A DROP OF WATER: 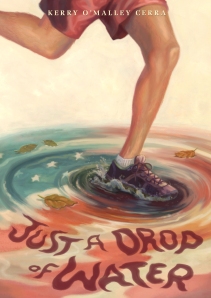 Ever since he was little, Jake Green has longed to be a soldier and a hero like his grandpa, who died serving his country. Right now, though, he just wants to outsmart—and outrun—the rival cross country team, the Palmetto Bugs. But then the tragedy of September 11 happens. It’s quickly discovered that one of the hijackers lived nearby, making Jake’s Florida town an FBI hot spot. Two days later, the tragedy becomes even more personal when Jake’s best friend, Sam Madina, is pummeled for being an Arab Muslim by their bully classmate, Bobby.

According to Jake’s personal code of conduct, anyone who beats up your best friend is due for a butt kicking, and so Jake goes after Bobby. But soon after, Sam’s father is detained by the FBI and Jake’s mom doubts the innocence of Sam’s family, forcing Jake to choose between his best friend and his parents. When Jake finds out that Sam’s been keeping secrets, too, he doesn’t know who his allies are anymore. But the final blow comes when his grandpa’s real past is revealed to Jake. Suddenly, everything he ever knew to be true feels like one big lie. In the end, he must decide: either walk away from Sam and the revenge that Bobby has planned, or become the hero he’s always aspired to be.

A gripping and intensely touching debut middle grade novel by Kerry O’Malley Cerra, Just a Drop of Water brings the events of September 11, which shook the world, into the lens of a young boy who is desperately trying to understand the ramifications of this life-altering event. 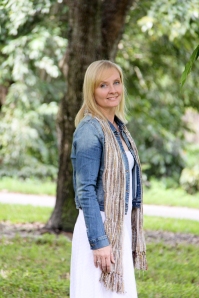 KV: Congratulations on the release of JUST A DROP OF WATER. What inspired you to write it?

KOC: Thank you, Krista! There are several reasons I wrote the book. I recently answered this question on an awesome middle school blog called Smack Dab in the Middle. I’ll link to it here, in case anyone wants to read it. The short answer, I felt bad about doubting a really good friend in the days following 9/11 and began to wonder when I had become so jaded. At what age is innocence truly lost? Plus, I used to teach social studies, so history is a passion of mine. I wanted a book that would let kids feel the emotions, fears, and patriotism that swelled in the days following the September 11. Experiencing things through a book is so much better than hearing a teacher or parent lecture about historical events.

KV: September 11th is a tough topic to tackle, especially if your readers weren’t even alive when it happened. How would you describe September 11th to a twelve-year-old?

KOC: I’d describe it as one of the most important events in American history. I get into this in more detail in the book, but, to me, history is one of the most critical classes kids take. It’s a course in life-lessons. Good discussions, covering what worked in the past and what failed, are important so that kids can someday lead our country with understanding and knowledge to make educated decisions.

KV: As someone who likes writing hotheads, I appreciated Jake’s weaknesses as well as his strengths. Where did his personality come from?

KOC: Well…*hangs head and mumbles* I think he’s a lot like me. I’m not a physical fighter (at all!), but I’m definitely a person who despises injustices. As a kid, much like Jake, I was very black and white. Though I hate that the world is still sometimes so unfair, I’ve realized that, like it or not, there are many gray areas. Jake has to learn to navigate those gray areas without compromising his strong beliefs. He does a lot of growing up in a short amount of time in the book, but September 11 truly did that for many people. I hope Jake’s character has enough depth that readers understand him, hotheadedness and all.

KV: Jake’s best friend and his family are descendants of Muslims (though they don’t practice Islam themselves). How did you research what it would have been like for them before and after September 11th?

KOC: The before part was easy. I have Muslim friends who didn’t particularly encounter any type of discrimination prior to 9/11 in our country. The after part is where I had to dig deep. I talked to as many people as I could and read book after book describing what it was like for Muslim-Americans after that tragic day. In reading Mecca and Mainstreet, Muslim Life in America After 9/11, I learned so much! In fact, when I read that many non-practicing Muslim teens in America after 9/11 actually turned towards mosques to learn what Islam really is, I knew instantly that that’s what Sam’s character would do. I was surprised when I read that information because I assumed that most kids would have disassociate themselves in every way possible with Islam, so it was a great avenue to explore in the book.

When the book was fully researched and written, I had two Muslim friends read it for accuracy. I’m so grateful to them because I originally had candles in the mosque and apparently that would never be permitted in real life.

KV: I really like sports books that aren’t really sports books. Why did you decide to make Jake a runner? Was that always part of the plan, or did it develop as you went along?

KOC: I love this question, but the answer is really bizarre in that I honestly have no idea!!! As an athlete myself, I’ve always loved sports. When I was brainstorming my characters, prior to writing the book, I knew Jake and Sam would play or participate in something. I think cross country evolved because I wanted a sport that showed Jake’s impatience. He really hates obstacles. Not just in running, but in all aspects of life. He’s always looking to take the easy route. Cross country seemed to fit that. Funny story: my kids recently found my varsity letter from high school with all my sports pins on it. I have a cross country pin tacked on and they were surprised because I’d never talked about running before. I played along for a while but eventually fessed up that I got the pin for keeping stats for the team. I am, and never will be, a runner—though I wish I enjoyed it.

KV: Not surprisingly, September 11th changed every character in this book. How did it change you?

KOC: I’m a pretty quiet person and as much as I hate injustice, prior to September 11, I was never one to publicly speak out against anything. When I heard about some of the things my Muslim friends endured in the weeks following 9/11 and heard some of the stories of hate crimes being committed against Muslims and to mosques around the country, something sparked in me. We cannot be the same people the terrorists are. We cannot lump people together by religion, culture, race, or any other means of discrimination. There are plenty of Muslims out there who are terrorists, but they are not all terrorists. There are plenty of priests who are pedophiles, but they’re not all pedophiles. I think you get the idea. Just a Drop of Water is my way of reaching the one age group I have the most hope for our future in. Kids. If they can learn to accept people for their differences and work together instead of against each other, then I think there’s hope for the future. Just a Drop of Water is my way of finally speaking out, publicly.

KV: “We cannot be the same people the terrorists are.” My favorite line in this interview. But I digress…

KOC: I’ll keep this one light, since the other answers are so weighted. Truth be told, I’m deathly afraid of alligators but I’m not afraid of heights and especially find a thrill in jumping off cliffs…provided there are no alligators below. 🙂

For more information about Kerry and JUST A DROP OF WATER, you can find her at her website, www.kerryomalleycerra.com, and on Twitter, @KerryOCerra. Also, don’t miss the book trailer!