In the latest installment of our OneFourKidLit interview series, we’re checking in with author Heidi Schulz on her debut, Hook’s Revenge: 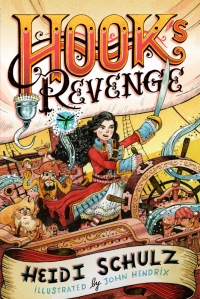 Twelve-year-old Jocelyn dreams of becoming every bit as daring as her infamous father, Captain James Hook. Her grandfather, on the other hand, intends to see her starched and pressed into a fine society lady. When she’s sent to Miss Eliza Crumb-Biddlecomb’s Finishing School for Young Ladies, Jocelyn’s hopes of following in her father’s fearsome footsteps are lost in a heap of dance lessons, white gloves, and way too much pink.

So when Jocelyn receives a letter from her father challenging her to avenge his untimely demise at the jaws of the Neverland crocodile, she doesn’t hesitate-here at last is the adventure she has been waiting for. But Jocelyn finds that being a pirate is a bit more difficult than she’d bargained for. As if attempting to defeat the Neverland’s most fearsome beast isn’t enough to deal with, she’s tasked with captaining a crew of woefully untrained pirates, outwitting cannibals wild for English cuisine, and rescuing her best friend from a certain pack of lost children, not to mention that pesky Peter Pan who keeps barging in uninvited.

The crocodile’s clock is always ticking in Heidi Schulz’s debut novel, a story told by an irascible narrator who is both dazzlingly witty and sharp as a sword. Will Jocelyn find the courage to beat the incessant monster before time runs out?

ARJ: I have to say that you have one of the most fun bios I’ve seen in a long time, Heidi, and that same lively voice and spark come through on the pages of Hook’s Revenge in the character of Jocelyn.

What inspired you to write “what comes next” in the aftermath of Captain Hook’s death, and to discover his daughter was a crucial part of that?

HS: Thank you! That’s so kind of you to say.

Peter Pan was my daughter’s imaginary friend and alter-ego when she was very young. I loved that. I painted fairies and Peter Pan’s shadow on the walls of her bedroom. We fought imaginary pirates with plastic swords, made fairy houses, and pretended to fly off to Neverland at the drop of a hat. I feel like I had been fairly well steeped in the story for a long time before the idea for Hook’s Revenge came to me.

One day, when my daughter was five or six, I had the flu. I entertained her with DVDs of Hook and the 2003 Peter Pan while I slept on the couch. When I woke up, I thought: What if Captain Hook had a daughter?

Hook’s Revenge grew from that question.

ARJ: Peter Pan is obviously a story which stayed with you into adulthood–which other authors and books influenced you as a child? And which ones as an author?

HS: I remember practically devouring wonderful books by Beverly Cleary, Judy Blume, Betty MacDonald, Shel Silverstein, and Roald Dahl. I also read a lot of classics in elementary school. Heidi (of course), A Little Princess, and Little Women in particular have stuck with me.

However, I tend to extremes in many areas of my life and childhood reading was no exception. I still remember the day I turned in Little Women to my elementary school library. That afternoon on my walk home, I stopped by the corner store for a snack. Instead, I spent my allowance my first Stephen King paperback. The next several years were a far cry from Louisa May Alcott as I read every Stephen King and V.C. Andrews book I could get my hands on.

I look back now and wonder what my parents would have said if they had realized what I was reading. I mean after they recovered from the shock.

I think one of my biggest influences as an author has to be Roald Dahl. He never spoke down to his audience. He understood that what kids like may not be what adults think they should like. I love that about his books. I certainly aspire to write for kids and to kids in the same way.

ARJ: Can you share a little bit about your writing journey for Hook’s Revenge? I understand it sold at auction, and that must have been exciting and nervewracking for all involved.

HS: Sure! As I mentioned, I had the idea for this book when my daughter was five or six. She will be turning fourteen next month so things certainly didn’t happen all at once. I wrote bits and pieces on occasion, just for fun, but it wasn’t until early in 2012 I felt I was ready to get serious about finishing it and seeking publication.

At that time, I had little more than a rough draft, but I went to work revising and polishing the best I could. I shared with a couple friends and incorporated their feedback. I also tried to learn as much about the business of publishing as I possibly could. I read blogs, followed industry processionals on twitter, joined SCBWI, and attended my first writing conference. In October of that year I signed with my agent, Brooks Sherman.

Brooks is an editorial agent and his feedback really helped prepare my manuscript to go on submission. After working together on revisions, Brooks sent Hook’s Revenge to editors the first week of December.

I did my best to put it out of my mind. I went on vacation with my family, came home, and got caught up in the Christmas season. I don’t mean to say I wasn’t nervous, but for me, being on sub was far easier than querying. I felt like I had done everything I could and that I could let go a little.

We got our first offer toward the middle of January and I was thrilled. Hook’s Revenge would be a real book! The next week we got a second offer and I learned my book would go to auction. I couldn’t believe it. It seemed too incredible to be true. Then Brooks notified all the editors that still had my manuscript and three more expressed interest.

I spoke to all five editors on the phone over the next week. Among other things, we talked about editorial vision and process. I was impressed by each one of those women. They were smart and had such great ideas for my book. I could have worked with any of them, but for a story set in the world of Peter Pan, I was really hoping to find a home with Disney•Hyperion. I wasn’t sure how many of the editors would end up offering, but I knew which one I had my fingers crossed tightest for.

The day of the auction came and I was shocked again when all five editors offered! It was really quite overwhelming. After negotiations, there was a clear stand out. I agreed to Disney·Hyperion’s publication offer on February 5, 2013—the 60th anniversary of Disney’s Peter Pan. It felt like it was meant to be.

ARJ: Without being too spoilery, what do you consider to be the takeaway themes for Hook’s Revenge? I have my own ideas of what they might be, but I’m always curious if I think they’re the same as the author’s.

HS: You know, it’s funny. I didn’t start writing with themes in mind. They emerged, often to my surprise, as I wrote and revised. I think, at its heart, Hook’s Revenge is about finding out who you are and what you can accomplish based on your own strengths. It’s about not being afraid to do things your own way, even if it means making mistakes. It’s about learning to believe in yourself, even if—especially if—everyone else seems to think you’ll fail.

It’s also about how cats are awful.

HS: Well, it’s no secret that I am both suspicious of and nervous around giraffes, but I was recently surprised at just how much I’m actually afraid of them. A few weeks ago, my family convinced me to have an up close encounter with one at a local wildlife safari place. I was on the back of a flatbed truck, pressed against the far side of the railing, sweating profusely and giggling hysterically as a giant giraffe ate lettuce from my hand. Here is a photo. It was far scarier than I expected it to be. I don’t think I will repeat the experience.

I am not afraid of speaking in public. I do get nervous, but it’s more of an energized feeling.

I am aware that neither of those emotions is normal. I’m rather odd, aren’t I?

Heidi Schulz is a writer, reader, and giraffe suspicioner. She lives in Salem, Oregon with her husband, co-captaining a crew made of their teen daughter, a terrible little dog, and five irascible chickens. Her debut novel for middle grade readers, HOOK’S REVENGE, will be published by Disney•Hyperion on September 16, 2014. A sequel, HOOK’S REVENGE: THE PIRATE CODE, will follow in fall 2015. Bloomsbury Kids will publish her picture book debut, GIRAFFES RUIN EVERYTHING, in 2016.

One thought on “ALL FOUR KIDS: AN INTERVIEW WITH HEIDI SCHULZ, AUTHOR OF HOOK’S REVENGE”