Next up on Fearless Fifteeners’ YA Q&A is author, Shannon Grogan, whose creepy awesome debut, FROM WHERE I WATCH YOU, is out on August 4th! We’ve got a bio and book blurb at the end of the post but first, crazy questions!

BW: You wake up one morning and, OMG, you’re invisible. What’s the first thing you do with your new ability?

SG: I go mess with the people I don’t like, naturally. Nothing dangerous, just enough to make them think they are losing it.

BW: Yes! Love the way you think. *high five* Sadly though, your parents aren’t too happy with your change. What fictional character do you ask to help you get out of the bind, and how do they “fix” you?

SG: Maybe one of the Ghostbusters. Venkman? Or maybe Ray (Dan Akroyd)

BW: Back to normal, you arrive at school and literally crash into your crush. He/she asks you why you’re shaken up. What do you tell him/her?

SG: I think I might have died this morning so he better make a move while he still has a chance.

BW:  Good plan! Nothing like a near-death experience to get the ‘ole hormones pumping. BUT, he isn’t convinced you’re telling the truth — after all, it’s a pretty far fetched story. He suggests going somewhere to talk about it more. Where’s this dream date taking place?

SG: Definitely on a beach somewhere. Or maybe Starbucks.

BW: It might not be true love yet, but there is a Happily Ever After in your near future. As a Fearless Fifteener, your debut is out this year. Tell us about your book in 140 characters or less

SG: 16 yo Kara thinks winning a national baking contest will help her escape her holy roller mom, her sister’s ghost, and her stalker.

BW: Awww, yeah!  Lots of intriguing elements there! And here’s the full scoop: 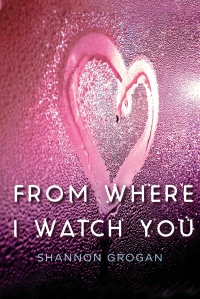 Sixteen-year-old Kara McKinley is about to realize her dream of becoming a professional baker. Beautifully designed and piped, her cookies are masterpieces, but also her ticket out of rainy Seattle—if she wins the upcoming national baking competition and its scholarship prize to culinary school in California. Kara can no longer stand the home where her family lived, laughed, and ultimately imploded after her mean-spirited big sister Kellen died in a drowning accident. Kara’s dad has since fled, and her mom has turned from a high-powered attorney into a nutty holy-rolling Christian fundamentalist peddling “Soul Soup” in the family café. All Kara has left are memories of better times.

But the past holds many secrets, and they come to light as Kara faces a secret terror. Someone is leaving her handwritten notes. Someone who knows exactly where she is and what’s she’s doing. As they lead her to piece together the events that preceded Kellen’s terrible, life-changing betrayal years before, she starts to catch glimpses of her dead sister: an unwelcome ghost in filthy Ugg boots. If Kara doesn’t figure out who her stalker is, and soon, she could lose everything. Her chance of escape. The boy she’s beginning to love and trust. Even her life. 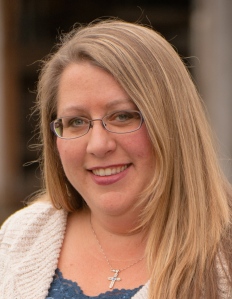 Shannon Grogan is a second grade teacher who writes at night (and while her kids are at ballet and baseball) in a small logging town east of Seattle. When she isn’t writing, she’s baking, reading, watching scary movies, and wishing she were at the beach. You can find out more about her online at www.shannongrogan.com

More details about FROM WHERE I WATCH YOU:

*Add it to Goodreads

7th: YOU AND ME AND HIM by Kris Dinnison
20th: HOLLYWOOD WITCH HUNTER by Valerie Tejeda
28th: DAMAGE DONE by Amanda Panitch

RAVENOUS by MarcyKate Connolly @The Class of 2k15

UNUSUAL CHICKENS FOR THE EXCEPTIONAL POULTRY FARMER by Kelly Jones is still making lots of lists, including the Amazon’s Best Books of the Year So Far: Ages 9-12, the book of the week at the Cooperative Children’s Book Center, and was included in the Seattle Times’ “Sublime summer choices for readers.”

Jones takes readers into Sophie’s world with a series of funny, insightful letters. . .Readers will hope for more from irrepressible Sophie and this talented author.

We’re halfway through our collective 2015 debut year, so it’s time for the FEARLESS FIFTEENERS HALFWAY GIVEAWAY!

You have the chance to win one of 33 novels that released January through July. The giveaway opens today and closes July 27. We will ship to addresses in the United States and Canada. On July 27, we will pull 33 winners–one per book until all books are given away.

To enter, all you have to do is click on the link at the bottom of this post, which will take you to Rafflecopter, and click on “Free entry.” For optional additional entries, you can submit a free entry each day during the giveaway. You can also follow any of the authors on Twitter whose name is click-able below. Here’s a look at the titles: 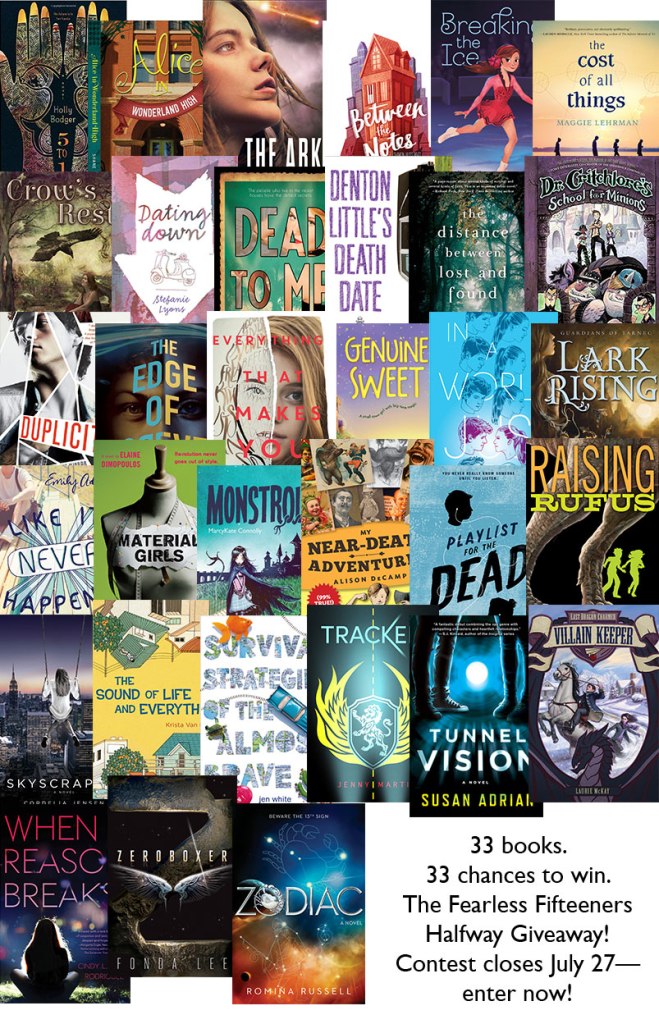 Here’s a list of the individual authors and titles. If you click on the title, you will be taken to IndieBound for a description. If the author’s name is click-able, and you already follow or choose to follow any of them on Twitter, then you will earn an optional entry. The Rafflecopter link is at the very bottom…..

Michelle Falkoff, PLAYLIST FOR THE DEAD

Kathryn Holmes, THE DISTANCE BETWEEN LOST AND FOUND

Melissa Hurst, THE EDGE OF FOREVER

Maggie Lehrman, THE COST OF ALL THINGS

Mary McCoy, DEAD TO ME

Moriah McStay, EVERYTHING THAT MAKES YOU

Sharon Huss Roat, BETWEEN THE NOTES

Krista VanDolzer, THE SOUND OF LIFE AND EVERYTHING

AND HERE’S THE LINK……