Today on MG Wednesday, mystery and magic abound in THE ROSEMARY SPELL. Before we get to the book, though, there be ogres here. What will debut author and fearless 15er Virginia Zimmerman do?

Virginia, you wake up and find a massive ogre in your bedroom. If you had to choose one MG character to fight him off who would you choose and why?

I would choose Jonas from The Giver because he would soothe the ogre by giving him carefully chosen memories. I’m always interested in how the past helps us in the present, and it would be fascinating to see what memories Jonas would choose and what effect they would have on the ogre. Plus, I also think villains are always more interesting (and more dangerous) when they are complex characters: seeing the ogre softened by memory would make his character much more compelling.

Having defeated the ogre, you find that your car doesn’t start. Bummer. Would you rather ride a dragon or a unicorn to work? Why?

I would definitely rather ride a dragon. If I’m honest, I think the reason is that I believe in dragons, and I don’t think I believe in unicorns. Lots of great writers—J.K. Rowling and J.R.R. Tolkien, not to mention Peter Yarrow who gave us “Puff, the Magic Dragon”—have worked hard to make dragons real. Since I teach some of these dragons in my job as a professor of literature, it would be quite appropriate to show up for class with wings flapping and scales glinting, proving once and for all that these great authors really wrote dragons into the world.

Arriving at work late, your boss asks you what your most embarrassing childhood memory was. You have to tell him.

When I was in fourth grade, we had cubbies for our backpacks and lunches and coats. The cubbies were very deep. At one point, a foul odor started coming from the cubbies, so the teacher made us all clean out our stuff, tidying what really needed to be stored inside and getting rid of anything else. At the back of my cubby, smushed and oozing, was an old lunch. It had once been a Lebanon bologna sandwich, but the meat had softened and melded to the brown paper bag. It was vile. It was the source of the odor. What I remember most vividly is the weight of the decomposing food in my hand, as if rot and stench were heavy things that added to the density of my former sandwich. To my teacher’s credit, she didn’t say anything as I scurried to the trashcan with my incriminating garbage. I knew I’d been the one responsible for the odor and for making everyone clean their cubbies. That was punishment enough.

You’re pretty fed up now, so when a time machine appears offering to take you to any historical event, you agree. Where do you go and why?

Well, I’ve written about Spain in the 1930s and prehistoric Orkney, so I could take the chance to check out those places, but in writing about those times, I sort of feel I’ve already traveled there. My next thought is that it would be cool to go to England in 1865. This is when Alice’s Adventures in Wonderland was published, and it was the first book written for the sole purpose of entertaining children. It would be amazing to be there at the beginning of children’s literature and to see that first generation of kids discover how books open doors to magical worlds and, at the same time, make the real world magical.

There is light at the end of the tunnel. As a Fearless Fifteener, your debut is out this year. Tell us about your book in 15 words or less.

Books are magic. Magic is real. Magic is dangerous. Books save the day.

About THE ROSEMARY SPELL

Part mystery, part literary puzzle, part life-and-death quest, and chillingly magical, The Rosemary Spell has plenty of suspense for adventure fans and is a treat for readers who love books, words, and clues. Best friends Rosie and Adam find an old book with blank pages that fill with handwriting before their eyes. Something about this magical book has the power to make people vanish, even from memory. The power lies in a poem—a spell. When Adam’s older sister, Shelby, disappears, they struggle to retain their memories of her as they race against time to bring her back from the void, risking their own lives in the process. 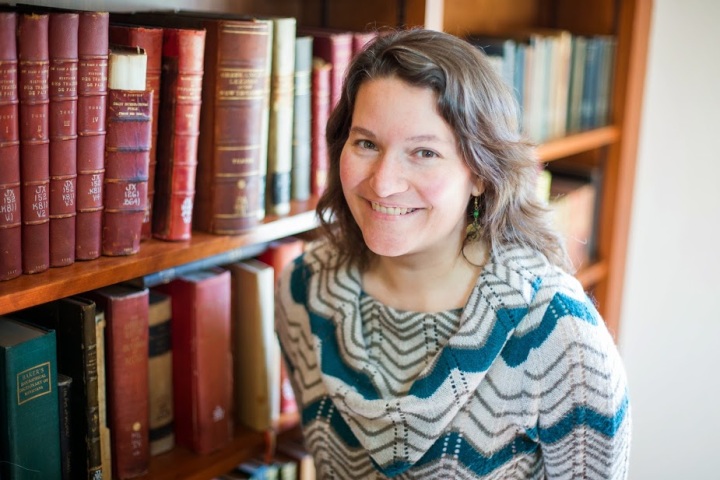 Virginia Zimmerman grew up in the Virginia suburbs of Washington, D.C., though she was named for a great aunt, not for her state. When she was young, she enjoyed writing and talking to friends about books, so she decided to grow up into a person who could do those things all the time. She was an English major at Carleton College, and she went to graduate school in English at the University of Virginia. Altogether, she enjoyed twenty years of formal education, much of it focused on reading. When she finished school, she wasn’t done reading, writing and talking to friends about books, so she became an English professor at Bucknell University. This means—and she still pinches herself to make sure this is real—she gets to read and write and talk about books for a living.

Virginia lives in a two-hundred-year-old house in a small town on the Susquehanna River in Pennsylvania, where she gets to read and write and talk about books with dear friends, inspiring students and beloved family. She lives with her husband, three children and little white dog.