I confess: I am a wuss when it comes to scary movies. I am 100% down with thrilling, suspenseful, or violent. Bring all that. But when it comes to full on scary—you know, the kind of movies with blurry poster images of screaming faces and tag lines like “Evil Awaits”—I am a sad coward.

I attribute this to the fact that I suspend disbelief way too easily. This is a helpful trait when it comes to being a speculative fiction reader and writer, but if you tell me that Candyman will appear if you say his name five times in the mirror, or that I’ll die in seven days if I watch this creepy video—well, damn I kinda believe you and now I’m not leaving the spot under this table.

Since this is Fearless Friday, I thought it would be appropriate for me to use one of my fears—scary movies—to describe something else that, despite all its genuinely wonderful parts, certainly inspires its fair share of terror—the publishing process.

You’re a writer with a book on submission and the rejections are coming fast and furious.

Hooray! An editor takes the bait!

You get your first editorial letter and it’s like:

During the revision process:

Soon you’ve read and revised your book so many times you can’t even stand to look at it anymore:

At times the process seems endless.

But then your ARCs are out, and you imagine reviewers are thinking:

Meanwhile, you’re trying to sell your next book:

And trying not to obsessively check Goodreads or Amazon Sales Rankings:

Yet, miraculously, your book does make it out into the world, and you want to write another and do it all over again!

Come back next Friday to see what scares my fellow Flux author Stefanie Lyons. In the meantime, help alleviate MY fear of premature career death by checking out the schedule of online and live launch events for ZEROBOXER and grabbing a copy of the book when it hits shelves on April 8!

I started writing THE DISTANCE BETWEEN LOST AND FOUND in 2012, sold it in 2013, and now—February 17, 2015—it is officially on the shelves. While I continue to remind myself to breathe, why don’t you gather around the fire with me?

THE DISTANCE BETWEEN LOST AND FOUND is about two journeys. There’s a physical one, when Hallelujah “Hallie” Calhoun, her former friend Jonah, and new girl Rachel get lost in the Smoky Mountains and have to find their way back to civilization. But there’s also Hallie’s emotional journey—arguably the tougher of the two—wherein she has to figure out how to bounce back and redefine herself after an incident with the preacher’s son turned her into a social outcast. I hope the book will take you on a journey as well, whether you’re an avid hiker/climber/camper/nature lover…

…or you’re allergic to the Great Outdoors.

I’m doing a mini-blog-tour this week to celebrate the book’s release, and you can learn more about that HERE. In the meantime, here’s what you need to know about THE DISTANCE BETWEEN LOST AND FOUND! 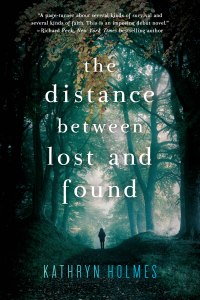 Now, six months later, on a youth group retreat in the Smoky Mountains, Hallie still can’t find a voice to answer the taunting. Shame and embarrassment haunt her, while Luke keeps coming up with new ways to humiliate her. Not even meeting Rachel, an outgoing newcomer who isn’t aware of her past, can pull Hallie out of her shell. Being on the defensive for so long has left her raw, and she doesn’t know who to trust.

On a group hike, the incessant bullying pushes Hallie to her limit. When Hallie, Rachel, and Hallie’s former friend Jonah get separated from the rest of the group, the situation quickly turns dire. Stranded in the wilderness, the three have no choice but to band together.

With past betrayals and harrowing obstacles in their way, Hallie fears they’ll never reach safety. Could speaking up about the night that changed everything close the distance between being lost and found? Or has she traveled too far to come back?